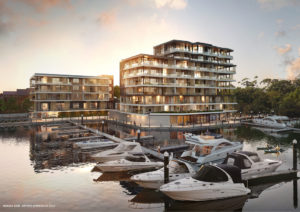 BLACKBURNE will launch Stage 2 of their Marina East project in Ascot this weekend.

Stage 1 of the 91-apartment development met with a strong response.

“We’ve had 913 registrations of interest since launching the project and stage 1 has been an overwhelming success with over $28 million of apartments already sold,” managing director Paul Blackburne said.

“In response to the demand that exists we are releasing 10 new apartment designs at the stage 2 launch this Saturday at 11am.”

Designed by architect firm Hames Sharley, Marina East will include a mix of one, two and three-bedroom apartments and penthouses, most with direct river views, over three-boutique sized buildings.

There will also be a ground-floor cafe overlooking the marina and residents will have access to a private internal garden and barbecue alfresco dining area. 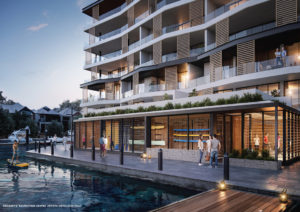 Recreation facilities will include a gym, yoga room and sauna, and a water sports room.

“This will include a couple of SUP boards and kayaks for residents to use, where they can paddle up the river and around the parkland in the area,” Mr Blackburne said.

“Residents will also have the option to store their water sports gear in this area.”

Marina East’s location, on the only marina east of Perth, will provide easy access to shops in Maylands and Morley, while residents can take their boat along the river from the Swan Valley to Fremantle, passing the Ascot Racecourse, Maylands Peninsula Golf Course, Perth Stadium, Crown Perth and Elizabeth Quay along the way.

“For the first time that I have seen, we have people moving from the western suburbs to the east,” he said. 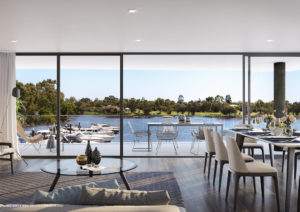 “Most demand has been for apartments in the $800,000-$1.5 million range, which demonstrates a strong resurgence in this end of the market.”

Penthouses are priced from $1.02 million.

Construction on the $73 million project is due to start this June and will be completed in late 2019.

A sales display with demonstration kitchen and bathroom and viewing tower is located at 16 Marina Drive, Ascot.